We’re a little older than that but Perceptics in its current form has been around for 10 years this October. And, in pure Perceptics fashion, we celebrated in style. After a catered lunch, we played our own rendition of “Family Feud” and “Let's Make a Deal” with fun prizes. The grand prize winner even went home with a pair of tickets to a Tennessee Football game! 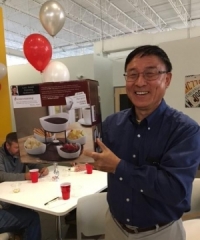 Here’s a little Perceptics trivia to mark the occasion:

Back to Insights
Blog

Who We Are Read More